Asia Jackson had no particular proclivity toward science when she was growing up.

“I was always interested in everything,” she said. “As much as I did well in all my classes, I actually did better in my history classes than any other classes.”

“It was the most fun I’d ever had,” said Jackson, 25, of North Babylon. “More than sports, drama. It encouraged me to study more science and look into other areas like engineering and technology.”

The exposure not only piqued her interest in science, technology, engineering, art and math (STEAM) fields, it was life-changing. Jackson went on to earn a bachelor’s degree in chemistry, and a career as a scientist appeared to be on the horizon.

Then Jackson had another STEAM-related epiphany — teaching science. Last summer she taught science concepts to children as young as 5 years old as part of a program for Girls Incorporated of Long Island, a Deer Park-based nonprofit that encourages girls ages 5-18 to be “strong, smart and bold” through interactive programming that often includes STEAM subjects. At the time, Jackson was pursuing a master’s degree in chemistry, but the excitement she witnessed in the young black and Hispanic girls as they performed experiments prompted her to switch career paths and pursue a degree in education. As a black woman, she said, she also realized the importance of showing the girls they could go far in STEAM fields.

“I see myself as not just a role model, but a resource they can come to,” Jackson said. “I didn’t have that, and I know I would have appreciated it if someone sat down to explain exactly what was to come. I would have been much better prepared, whether it was science or the whole college process.”

Despite decades of advancement in various careers, women represent only a small fraction of those in STEAM fields, and women of color an even smaller fraction. Amid a growing national effort to bring more women and minorities into STEAM careers, Jackson and several other women of color on Long Island are taking it upon themselves to educate and mentor young girls of color to pursue these subjects.

The uneven divide along racial and gender lines runs through all STEAM areas but is most acute in engineering, statistics show.

To help bridge those gaps, Nada Marie Anid, dean of New York Institute of Technology’s school of engineering and computing sciences in Old Westbury, organized the school’s first “Introduce a Girl to Engineering Day” in February.

“We want to change this fear of engineering so that, instead, it empowers and instructs these kids, especially minorities,” Anid said.

The event allowed girls in middle school and high school to fly small drones, and featured Laurie Cantileno, client solutions manager for Cisco Systems Inc., who instructed the girls to ask questions, band together with other women for help and not let fear hold them back. Developing expertise in these areas is just as important as classroom learning, Anid said.

“It’s not just about engineering, it’s about all of these skills that you need to succeed when you’re the only person in the room [who’s different], whether you’re female or a minority or both,” she said.

Monica Bissainthe, 15, a freshman at Longwood High School in Middle Island, was thrilled to fly a drone, but Cantileno’s message had an even bigger impact, she said.

“Listening to the speaker say that we can do anything, I felt inspired,” said Bissainthe, who wants to become an earth science teacher. “It makes me think I can do whatever I want.”

Women in STEAM fields said there are numerous reasons why girls tend to gravitate toward other fields of study, including feeling intimidated in class or lacking encouragement from their parents or peers.

“If someone didn’t tell me about a lot of these summer programs, I don’t think I would have been interested in science,” said Dr. Dilys Whyte, a physician in the pediatric nephrology unit of Good Samaritan Hospital Medical Center in West Islip. “I think it starts at a young age. We have to show them it’s actually fun to do a science experiment.

Whyte, 48, of Coram, didn’t take a serious interest in the sciences until a high school social studies teacher encouraged her to take part in summer science programs, including one at Massachusetts Institute of Technology. She decided to pursue medicine, but, having rarely encountered black physicians growing up, “it did make me hesitate,” she said.

After graduating from Yale, Whyte pursued her medical degree at the University at Buffalo, where she joined a student association for minorities and immediately felt a sense of comfort.

“Seeing someone who looks like you does make a difference, because then you say, ‘You know what? I can do this, because there’s that person who’s doing it,’ ” she said.

The magic of math

Pleshette Shelton loved math so much that in college, she said, “While everyone was out partying, I was doing differential equations.” But even though Shelton, 42, attended Delaware State University, a historically black school, she found herself the only person of color and the only woman majoring in electrical engineering.

“They couldn’t understand why I was in this calculus class, and was I sure I wanted to take this calculus class?” she said. “I had to keep reminding them, ‘Yes, I belong here. Yes, I graduated from one of the top high schools in New York City.’ ”

Shelton, who lives in Bay Shore, eventually transferred to Long Island University and switched her major to math.

She is vice president of human resources for Willis North America, a subsidiary of one of the largest insurance brokerages in the world. In her spare time, she works with the Sigma Psi Omega chapter of Alpha Kappa Alpha sorority, making presentations and meeting with young girls to discuss her job and the importance of studying STEAM subjects.

Shelton analyzes the company’s business plan and uses her math skills to figure out how to grow business “from a human capital perspective.” At times, she must produce solutions, such as detailed bonus plans.

“If I just had a regular business degree, there’s no way I would be able to do that,” she said. “It is with STEAM and having the math and analytic background that allows me to do that.”

Anid, of NYIT, said sustained programming for women and women of color is needed to keep them on a STEAM trajectory, along with strategies that include teachers and parents.

“We need touch points to teach them new skills,” she said. “We need to show them how thrilling it is to invent and discover.”

As an educator, Serena McCalla, 39, of Glen Cove, said she has seen how girls sometimes need extra encouragement to go further with science research.

“Women, we’re so bright but we’re so timid,” she said. “Some of the girls, I have to force them, push them, to see that they’re better than some of the boys.”

McCalla is the science research coordinator at Jericho High School. In her six years there, the school has produced 38 semifinalists and four finalists in the renowned Intel Science Talent Search. She also has helped a dozen students get published in scientific journals.

McCalla said she often runs up against cultural mores instilled by parents who don’t believe in women having jobs or pursuing certain careers. Recognizing that many students, including minorities, often don’t have a lot of scientific resources at their schools, McCalla has started a business “to help students enhance their love of science and assist in directing those who may not have guidance in the high school or collegiate competition aspect of the science research arena.”

Neela Lockel also works to provide supplemental exposure to the sciences. She is executive director of Girls Inc., whose members attended the recent STEAM event at NYIT. Her group targets those in “hidden” communities, often minorities and those living in poverty.

“We want to make sure these girls get the chance to see and do,” Lockel said. “We spend so much time telling girls not to get dirty. We want to tell them it’s OK to get messy, that it’s a way for them to develop interests and passion.”

West Islip student Megan Delianne, 15, enjoyed flying the drones at NYIT but already has her mind set on her college concentrations: corporate and petroleum engineering.

Delianne said her interest in science was spurred by appreciating more than just the entertainment value of science-fiction movies and video games. “I always wondered how they were made, and I wanted to be a part of it,” she said.She plans to join her school’s robotics team this month and said she is not deterred by the lack of women or minorities in her chosen fields. “If something interests somebody, they have every right to be involved in it, so that’s what I’m going to do.”
SURPRISING AND UNUSUAL STEAM CAREERS 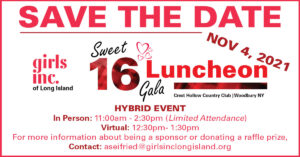